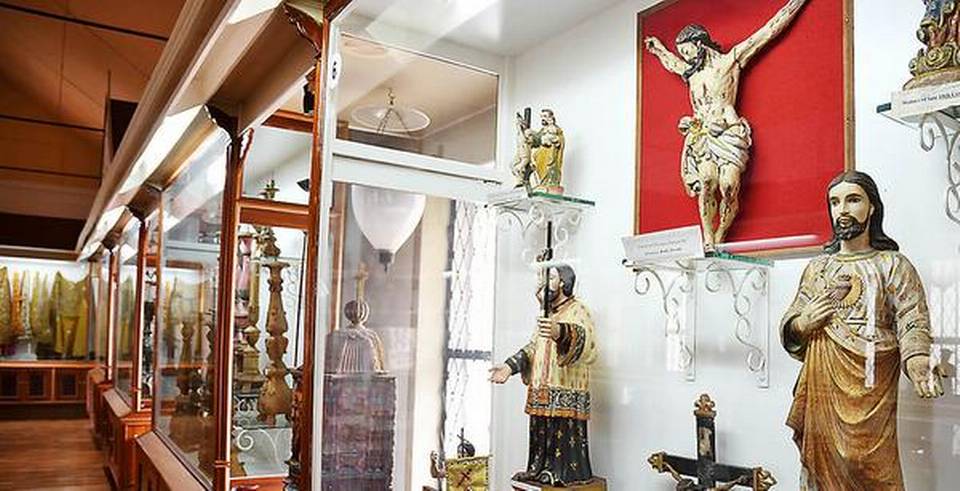 The Catholic Art Museum, which was set up under the guidance of Fr Ignatius in 2001 (supported by the Archdiocese of Ernakulam) is testimony to the narration, when ancient Indian culture amalgamated with a new faith that came from the Middle East.

“One must understand that the arrival of Christianity in Kerala soon after the death and resurrection of Christ was because Muziris was a global trade centre. Religions plied their way on merchant ships to anchor on the shores of Kerala,” says Fr Ignatius.

He explains that while scores of ancient churches are being demolished in Kerala without understanding that the community is erasing proof of its ancient past, collecting artefacts that were once housed there was a task. Shipped as antiques to countries afar or left to be destroyed in musty godowns, “it was a treasure trove of precious things we lost.” What he has managed to preserve in the museum is a minute display of Kerala’s position in world history.

Situated next to the St Mary’s Basilica in Ernakulam, the two-room museum has not found a systematic curatorial face yet. But the care and passion from Fr Ignatius is evident as he explains details of the displays. “Some have been collected from early Christian churches that were demolished or renovated, some donated by ancient Christian families. Amongst the exhibits are paintings he has collected from different eras, some in vegetable paint. The styling of altars in wood and the exquisite filigree work make them exceptional. The uniqueness in the objects displayed is the layers of stories that they carry: the statues of the Virgin Mary and Jesus Christ (assumed to be from the 14th or 15th century) carry distinct Buddhist influence. “There is the possibility that the sculptor would have had no idea of what the Virgin Mary or Christ looked like. It is natural that the local art of the time would have deeply influenced the artist’s perceptions. The horse, which St George is mounted on, looks neither like a horse nor a donkey. “And the saint is mounted as if he sits on an elephant, not a horse!” The collections include hand-embroidered robes in gold thread, carrying local and European designs. Ancient coins, early Christian jewellery, Bibles in Aramaic, even a copy of a Jewish Torah, which Fr Ignatius believes, may have been sold by the Jews before migrating to Israel.

The Jews were here even before Christians set foot in Kerala. There are a number evidences present in ancient artefacts that speak of the overlapping of cultures. These could be common traditions from the Middle East or may have emerged from the free integration of neighboring customs. The presence of Kerala is seen in specific additions of art forms such as the banana flower and cashew fruit, seen hanging from carved wooden edifices of church altars. Enormous drums that gave the call for church festivals (just like in temples) and palanquins that carried bishops tell of a unique Christian culture that existed nowhere else in the world. Fascinating collections are the scores of palm leaf manuscripts, which have been collected from churches and homes.

Painstakingly preserved and digitized by Fr Ignatius in the archives of the museum, he says the value of these is unexplainable. In old Malayalam script, “there are details, which offer information never known before. What is interesting is when one studies these, many finer details of history are revealed. One such church is the Manglasherri Church in Koratty, which to date, bears the name of a Brahmin family, which donated the land to Christians to build a church.”

“Today, we are able to learn so much more of ancient Christianity through a deep study of antiquities that remain. Imagine if the clergy and the church preserved this precious past, what a wealth of information for scholars, the community, and to Christians in Kerala it would offer.”

An article on The Catholic Art Museum (owned by the Archdiocese of Ernakulam-Angamaly) by Tanya Abraham published on The Hindu news Paper, 18th May 2018.