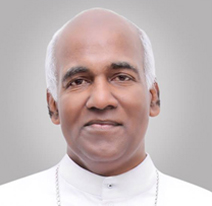 Born on 23 November 1957 of Ouseph Chacko and Thresiamma at Vaikom Fr. Sebastian had his school education at St Joseph’s L.P. School and St. Theresa’s High School, Vaikom from 1963 to 1973. He joined the Sacred Heart Minor Seminary of the Archdiocese of Ernakulam-Angamaly on 1st July 1973. Three years later he was sent to the Papal Seminary, Pune where he did his seminary studies from 1976 to 1983 and was ordained priest on 18th December 1983 by Bishop Sebastian Mankuzhikary at St Joseph’s Pontifical Seminary, Alwaye. After the ordination Fr. Sebastian took a Master’s Degree in Theology from Jnana-Deepa Vidyapeeth, Pune. During his priestly ministry in the archdiocese he served as parish priest and secretary to the late Cardinal Antony Padiyara. His most pioneering assignment was as Executive Director of ‘Save A Family Plan’, in Canada. He has been serving in this capacity for the last thirteen and half years with utmost dedication and sincerity.
His appointment as Bishop Auxiliary of Ernakulam-Angamaly and titular bishop of Macriana Maggiore (in ancient Byzantium, Turkey) was announced on 4 February 2002 and was consecrated Bishop on 20 April 2002 by Major Archbishop Mar Varkey Cardinal Vithayathil at St Mary’s Cathedral Basilica, Ernakulam.Mar Sebastian Adayanthrath, the syncellus was appointed the Protosyncellus on 10th September 2012. He was elected as Bishop of Mandya Diocese on 30th August 2019 and appointed on 8th September 2019.